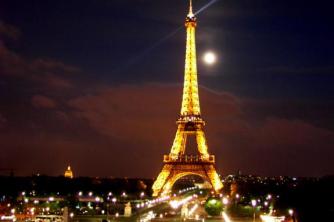 I took the liberty to publish on my own blog the article of one of my Americain friends, who discovered Paris last new year...

Well, as you may know, Laura and I went to Paris over December break. We were able to do it super cheap (€256 including food, lodging and travel, which is about as much as most couples spend during a non-vacation week). The French really take their role in the world and in history seriously as well as the equality principle, and so, as young students, we were able to find ways to get into everything free or really cheap. Yay!

The pics are all on Laura’s facebook, in three ablums. http://www.facebook.com/photos.php?id=3219558.

The following are things from a notepad that I wrote down while on the trip.

Lately, I have been thinking of how simplistic, repititive and sheep-like human are. I have been thinking this especially in relation to global warming. We have known about this for 30 years, and people are barely adjusting their lifestyes, and nowhere near enough to avert disaster.

My recent travels have confirmed this view of humanity. We stood for 15 minutes in a line to buy tickets for the metro. Later, we realized that there were dozens of other kiosks, and that everyone went to the one or two that people were already in. Plus the annoying American girls behind us traveling on their parent’s credit cards, yet arguing about money annoyed me further. Especially with how tight Laura and my budget is right now. I have to think really hard before buying a coffee, and ussually end up not doing it. I never had a credit card from my parents. I paid for my education myself. I got my first job when I was 14. In college, my dad gave me $20, once.

Well, in cafe with Laura now, sharing a glass of red wine. My hands are very cold. We stopped for coffee earlier at McDonalds. Then, we walked around all day.

First, we took the metro to the Latin Quarter. Then walked around, spotted the very noticeable Notre Dame. Took pictures out front. Very long line, moving fast, but we did not go in. Saw Palace du Luxembourg with Senát. Gardens very unlively this time of year. Very gnarly trees. Guy with coffee and cigarrette staring across a park with gnarly trees behind him is a memory that will stick in my mind from from the Palace du Luxembourg. It seems many lonely urban dwellers go here to relax for a bit, take a break, and get a bit of human interaction by watching people walk around.

Lots of anxiety. I am struggling almost as much as junior year of college. It is really not fair on Laura. She is too good to me/for me. I feel like we are becoming like Ross & Allison. I still never bought a ring, and I want to propose tonight or this weekend. I am so dependent on her, and I make too many excuses.

Well, back to the trip. We saw the crypts where six million Parisians are buried. Very morbid. Got me thinking of the futility of life, but also on the need to write a grand PhD topic in order to cement myplace in history :-). The French great structures and graves inspire greatness, but also a pressure that can be very overwhelming.

We then saw the Panthéon (it was closed), statue of Rosseau, law school, Sorbonne, gothic church, that I really liked near the Panthéon. It was very white and well-maintained. I think it was the St. Etiene du Mont. I think Pascal was buried there.

Then, we saw the Hotel de Ville, which had part of the Foreign/War Ministry in it, I think. The UN Declaration of Human Rights was out front. We also saw the mayor’s office.

Lots of beggars here compared to The NL. Probably more than many US cities. It must be a good place to beg, but I didn’t see many people giving money. We saw about five people roasting chestnuts to sell, two artists, and lots of used bookstores.

There were lots of communist bookstores. In Utrecht, I saw a man with a Ché shirt and bag. I still have fantasies/yearnings for the revolution. I don’t think I will ever come to peace with the yearnings or with modern society.

The Liberté, egualité, fraternité motto is everywhere. Also interesting is that the EU flag flied equal with the French flag at the Ministries and mayor’s office. Such a nationalistic country and history exists alongside with EU identity and policies. I thought about whether it is good to have a big or a small country. For a movie industry (Hollywood, Bollywood), bigger is better. For effectively providing social services, smaller is superior, like The NL. Thus, the division of EU/National competences really seems to make sense in that respect.

The lack of a people that I can feel apart of. is devestating for me. It was really reflected in the 2-3 hour train delay for me. European integration and cross-national travel, work, and integration to a large extent is destroying national politics which are really necessary for popular movement and change. Judicialization and technocraticization is increasing here in Europe. I still have mixed feelings about that. I mostly despised it in the US, but like all other judicial scholars, I am more outraged by it when it is opposite my political wishes.

Another thought: We talked at length to Laura’s University College Utrecht friend Yang Yang. She was travelling home to China. She is Dutch and Chinese. She speaks Chinese, Dutch, English and some French. Not bad, eh? These students with such backgrounds are going to blow US students out of the water more and more during my lifetime. Mimi too [our Australian friend who speaks Chinese and went to the U. Sydney for law school]. They have no debts too, unlike the American students.

Oh, and I think French is a beautiful language. France and the US are, historically speaking, the leaders of liberty and democracy. Knowing both legal systems would be so amazing :-). But, I should stay focused.

In the tram. I have proposal speech ready. Being engaged will really lift a lot of the anxiety from my mind and heart. I think if anyone going into this is ever certain about such things, then they are a fool. I am very nervous, but not showing it. My public speaking training is serving me well, I think.

Proposal Speech:
I added in a sentence or two, but here was the speech, which I designed to be succint because many men ramble on at such a moment and that is no good:

[on my knee]: “I think that you are so beautiful [pause], so intelligent [pause], and so right for me. I am offering you my mind, my heart, and all that I have. I cannot give you everything in the world. But, I do offer a sublime mix of American idealism and Dutch pragmatism. Nothing would make me happier than if you would be my partner and my wife. Laura Magdelena Henderson: Will you marry me?”

Laura [in shocked]: Yeah, ok. I am scared, but together we can make it”.