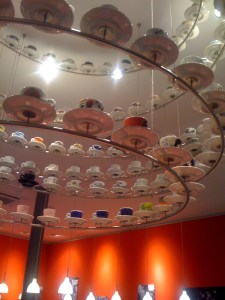 Paris, Italy and coffee. And I would add Parisian blogwriters.

Do you follow me ?
I make it clear : tonight, discovery lesson in the Illy “Esspressemente” café in Paris. At the menu, a lecture on the coffee making given both in French and Italian by a professor from the University of Coffee in Paris and an Italian professional taster at Illy’s since 30 years !

Illy, what is it ?
This is an Italian brand of coffee, at the origin of the creation of the first paper coffee bags (by Ernesto Illy – and no,  Georges Clooney has invented nothing !).
Since 2003, Illy created its first Illy café outside Italy in our dear capital.

The concept ? A chic bistrot decorating in red and black, bar in steel, an illimited choice of Illy coffees. Moreover, products 100% made in Italy (even the delicatessen, the seats and a part of the staff come from there!).

Above the central table, a very surprising big ceiling decoration : tens of cups customized each year by a new artist (last year it was the Spanish moviemaker Pedro Almodovar’s turn).
A farandole of colored cups for the big pleasure of your eyes !

On the right wall, the shadows of faces almost kissing (a wink to the “café nommé désir”?), further, black and white photographies from Sebastio Saldago in honor of the coffe-cultivators, on the left, the big steel bar, one of the “esspressemente concept” symbols.

And there, you are wondering why I spoke about the blogwriters…

Well tonight, we were 5 Parisian blogwriters invited to this tasting event where we learnt to taste coffee correctly (Fabiana, the “pro” taster tastes more than 120 ones a day !), that 120 millions people work in the farm sector of the coffee production in the world, that arabica is better than robusta and even that Paris is the test-city for the implementation of new concepts all over the world !

Except MissaParis, were there Eloise from ParisTempsLibre, Naïma from les Bons Plans de Naïma, Sophie from Gourmetise and Anne from Une gourmande à Paris.

Finally, the discovery of a nice place to drink a good Italian coffee, the meeting with Parisian blog-friends, and all of this in front of a cup full of the mix of 9 coffees from 15 different countries : a little of Peru, India, Brasil and I don’t know where in a little cup in Paris !

What else ?
(Final sentence already used but inevitable !)