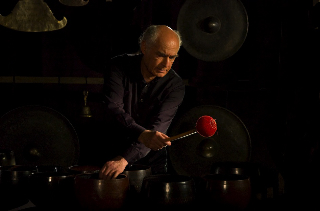 And if I said that Paris had once again given me the priviledge to have a nice meeting ?

That is in the musical Paris, at a concert during the Romantika Festival that I discovered Monsieur Alain Kremski. Musician, composer, pianist and percussionnist gone to discover Asia, this Parisian passionate in arts has taken time to answer MissaParis’ questions.
An interview done in 2 times, in a café of the Ile Saint-Louis, so far from the world of the classical music but so close of the Paris he likes and that he considers as “his” city.
That is a simple, passionate and captivating man who takes time to listen and to share and who is waiting for me (twice) in front of a just served coffee…

MissaParis : Who is Alain Kremski ?
Alain Kremski : Unclassifiable ! I am open on many things from different areas in a world where we classify people in boxes, with etiquettes.

MissaParis : Well, which artist are you ?
Alain Kremski : I think there is several categories of artists : some ones have chosen to improve the interpretation of a composer, and that can fill in a life. Others have chosen to play and to compose. On my own I am fascinated by the meeting of severel arts, particularly the architecture, evocating the ideas of the close and the far, the empty and the full.
What is important for an artist, it is to have a goal. And each goal is possible if it is clear. Mine is to wake in the public the nostalgia of the lost “source”, something coming from far away, even sometimes from the childhood. I like the meeting between the artistic disciplinaries : music, architecture, cinema, dance, painting, the realisation of calligraphies while we are playing the piano etc…

MissaParis : And what are your inspirations ?
Alain Kremski : I don’t know ! I have many passions : chess, the science-fictions (quantum physics, etc…) and I have a contact with poets too.

MissaParis : Your musical and artistic universe is so vast ! For instance, you composed and have studied Asian and Tibetan music. Where has this envy to explore all these different universes come from ?
Alain Kremski : I lived at the Villa Medicis for 3 years and the director was the painter Balthus ! He was a great influence and allowed me to open to the notions of transparency, lightness, sacred. All is energy, movment and quality of energy. My professor, Olivier Messiaen, did a lot too.

MissaParis : Do you have a favorite composer ?
Alain Kremski : No, not really ! But among the classical ones, I would say Bach and Mozart. And Brahms, Chopin, Nietzsche, Debussy, Schumann and Liszt for the romantical ones.

MissaParis : Your passion for music is undoubtable and this has certainly contributed a lot in the creation of the Association Mélomania. How was it born ?
Alain Kremski : Mélomania was born from a meeting 6 years ago with Dominique Bertinotti, Mayor of the 4th arrondissement. The first idea was to create an organization around the piano, with people around it, in Jean-François Zygel’s manner.
And then the configuration of the room, very long, didn’t allow that. So we have chosen a more classic representation, with the piano on stage.

MissaParis : And what is Mélomania’s goal ?
Alain Kremski : That is very precious in a society where a lot of people are alone, old, widow, when the children simply left. That is not always easy for old people to go the theatre in the Champs Elysées, at 9 pm. There, I do go to them at 3 pm on Saturday, once a month.
And has gradually been created a complicity with these people, a fervor, a respect despite of the freeness of the concert, even a “Mélomania spirit”.

MissaParis : How is the programming done, the choice of the artists ?
Alain Kremski : I approach artists, others approach me, but unfortunately I can’t honor all the demands. The artists come to play because they like the room, the atmosphere, and because thay want to bring something particular. Each time there is a theme, which allows to make more or less known musicians discovered.  That is the theme which is important.
For instance we are going to give a concert about “the water and the dream”, while will be played Ondine from Ravel and Ondine from Debussy.
We already had a trio piano – violin –  cello, with the pianist Nicolas Boyer, and the theme was “the treasures of the Russian music”, a concert which was played like always, in a respectful and enthusiastic atmosphere.
Last year a truck with 50 church bells from the region of Douai even came to end a concert on the bell’s theme, while were interpreted piano pieces from composers inspired by their sonority (Debussy, Liszt etc…)
Music is a travel and the artist life is fanciful !

MissaParis : This creation of this regular event shows your attachment to the capital…
Alain Kremski : Paris is my city !

MissaParis : Do you have a favorite place ?
Alain Kremski : The île Saint-Louis ! And also the jardin of the Palais Royal.

MissaParis : Finally, the ritual question of the end : do you have a good address to advise ?
Alain Kremski : You will eat the best crêpes of Paris at the restaurant “Le Sarrasin et Le Froment”, Rue St. Louis en l’Isle !

The news of Alain Kremski, in the frame of Mélomania, City Hall of the 4th :

Other projects :
– About ten CDs should come out this fall : Nietzsche, Borodine, bols of Japan, of Tibet, and a CD for the dance, which is the result of a collaboration with the choreographer Carolyn Carlson…