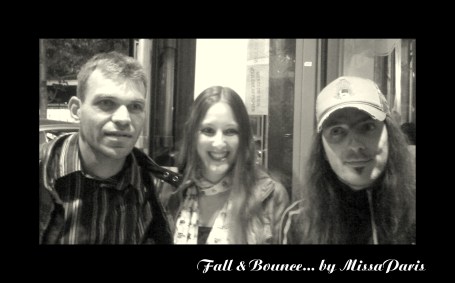 … We could have thought that the Fall & Bounce would have arrived with black clothes, a little dark… Normal for a rock/metal band, right ?

Well, I’m stopping you right now : Line (bass and voice), Yan (drums) and Guillaume (guitar), the three members of Fall & Bounce, are smiling, funny and don’t have the expected look of Marylin Manson. But more than everything, they are passionate of music and of their group linked by a true friendship. And I had the pleasure to see that during the (almost) 3 hours and a half interview in an Auvergne bar in the butte aux cailles street, in the 13th arrondissement…

MissaParis : Fall & Bounce is a Parisian goupe of “Power Rock”… you could say more ?
Line : The Power Rock is neither too much connoted metal nor too much connoted rock. This is a word which fits us perfectly, as we are at the limit of metal, but not metal…
Yan : And the metal is too selective !
Line : But the word can change according to the countries : for instance in US they say we doPower Pop !

MissaParis : How was your band born ?
Yan : Line and Guillaume were already members of a band with Jeff, a common friend drummer who introduced me to them. When he left I joined them.

MissaParis : And how have you chosen the name of the group ?
Line : “Fall & Bounce”, that concerns any of us, we all have to know how to fall and bounce at a certain moment of our life. And in English because we sing in this universal languague which is spoken by the most important number of people.

MissaParis : Go back to the development or your art. How did you start music ?
Line : I started playing the violin when I was 6…
Yan : And I did start when I was 18, learning guitar by myself. Then I played drums and I created a metal group.
Guillaume : I also started by guitar, taking lessons but thanks to a very important event to me : I was at the cinema with my father and I stayed to listen the music of the end of Terminator II. It was a song from the Guns N’ Roses… There I told myself I had to buy a guitar !

MissaParis : Your band was only born in 2007. And yet we can feel a deep friendship which links you.
Yan : That’s true and we don’t have to speak when we play.
Line : We often start from an idea, then everyone brings something and we never know where we’re going !
Guillaume : And beyond the music, that brings a lot humanely.
Line : The human aspect, that’s the most important !
Guillaume : Anyway a band can’t live for a long time if it is not united.

MissaParis : For the writhing and the composition, are you as united ?
Guillaume : Line often starts writing a text, then I think of a melody and then Yan adds drums.
Line : Our texts are not engaged but come from an idea I thought of, something I saw or I felt, outbursts…
Yan : In certain bands, one writes and says to the others to play. We do not !
Line : We do build something.
Guillaume : Music is composed to be pmayed and shared.

MissaParis : Classic question, but what are your inspirations ?
Guillaume : We all listen to different bands, but the only artist we have in common is Lady Gaga !!! What she does is very technical, very pro and that is the image we would like to show in rock music.

MissaParis : So what is your favorite artist for each of you ?
Line : Metallica !
Guillaume : That’s hard to answer… I like saying that I am NOT influenced by Jimi Hendrix !
I like everything ! For the moment I’m listening to John 5, the former guiterist of Marylin Manson and who is between metal and country music ! Before the Guns N’ Roses of course…
Yan : For the moment, Eths, Smashing Pumpkins, Metallica, Dagoba… More Heavy metal bands.

MissaParis : Your first album “Taste of your Medicine” comes out in February 2011. How do you feel it ?
Line : We had looked for a direction and we have found it. Songs are very different, the next one will certainly be more homogeneous.
Guillaume : We have evolved since we recorded it and I think we are never satisfied by our albums. Ozzy Osbourne never listens to his for instance, he prefers starting a new thing, and he is right.
Yan : An album is a photo of what you play at a particular moment. And we did all our best at that moment.

MissaParis : Do you have a favorite song in your album ?
Line: “Taste of your medicine”.
Yan : This song is unifying and shows the general style of the album. I like “The Story ends” too.
Guillaume : My favorite one is “Hiding in myself”.

MissaParis : You have a job which is not linked to the group. Would you be ready to give up everything to focus on your carreer ?
Yan : Yes !
Line : If we could do it as a full-time job, yes !
Guillaume : Concerning me, I have already started as I give guitar lessons.
Yan : Music enables us to express ourselves, that’s a true liberation.

MissaParis : As you are a Parisian band you can’t avoid the final MissaPairs question : your favorite place in Paris ?
Guillaume : I love the Latin Quarter, the Opera quarter, Pigalle.
Yan : I would say the docks in Jussieu area, particularly during summer, when a lot of bands from dirrent styles are playing…
Line : Bercy ! And the Parisians places of concert.

MissaParis : And a good address ?
Yan : La Maison, in the 16th arrondissement. Meat is great, the restaurant is just close to the best butcher in Paris !
Line : The Diable de Lombard at Châtelet. They do the best hamburgers of the world !
Guillaume : The  Michu Pichu, a Peruvian restaurant near the Panthéon.

MissaParis : Finally, where do you dream to play ?
Line : At the Parc des Princes or at Bercy ! Who doesn’t dream of that ? Guillaume : A first part at Bercy or  the Elysée Montmartre, it would already be great !

Waiting for their album in February 2011, I encourage you to come and applaud them at the Batofar on Tuesday September 28th, 2010.

You can buy your tickets directly at the Batofar or before contacting directly the band via Myspace.