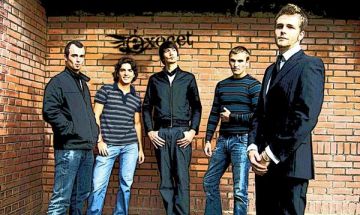 On Saturday night, the 5th of February 2011 at 8 pm, you all will be at the Espace B, won’t you ?
At the Espace B ? Yes, of course, to applaud the Exocet in concert !
You don’t know them yet ?
Read this full color interview to know them better.
The Exocet, that’s your turn…

MissaParis : Exocet, what is it ?
Kévin: Exocet, that’s the project of childhood buddies.
Camille: First, my brother Clément did drums whith Geff at the guitar. Then I joined them, but not alone. I asked David, my friend from a long time ago, to be part of the band. He thought it was cool and so he chose the bass. Same thing with Kevin, who chose the guitar. Well, I think it is in 2002 that the band is complete and can begin staying in the same room 10hours a day and during the weekends to get used to our instruments.

MissaParis : Exocet, who is it ?
Camille : Mmmmmh that’s embarrassing, we partly already answered just before !
Well, we are going to try to complete. So they are the five childhood buddies in question. But from the musical point of view, we have always be guided by the envy to create our own stuff, even if is bad in the beginning. Kévin and David had never touched an instrument. Me I didn’t Star Ac. So the majority of couldn’t play. I will always remember the moment when David bought his bass !! “Ok, I will take that!”. He had never played the bass or the guitar before !! But soon we wanted to compose and we learned to play like that, unlike numerous bands which start playing reruns and compose later, when they are “operational”. We didn’t wonder if we had to play reruns or do anything, but our own stuff, it happened like that, naturally.

MissaParis : Question I am not the first to ask : why Exocet ?
Camille : Because we write in French, we are a French band, and it wouldn’t be coherent to have “The jsaispasquoi” (Idontknowwhat) or some word which sounds English as a name. And for the choice, we looked what Mister Larousse could propose, and we found this flying fish we didn’t knowthe name. We liked it. We chose that !

MissaParis : And what are your influences : pop, rock, pop-rock, old classicals… ?
Kévin : The melodious rock !
Camille : Yes, it is, that is exactly that. Melody is more important than the rest. In the music, you can enjoy different things, like technical exploits, striking lyrics… We do like and look for melody in the first place. Any how, we put the Beatles above the rest of the music, and not because of the lyrics.
Well, that doesn’t mean we don’t care of the other aspects, like lyrics, but when we like a melody, that’s 90% of the way done.

MissaParis : What is the song/the artist who made you want to play and sing ?
Camille: That is not a song particularly. The artist,The Beatles, for sure.

MissaParis : if you had to put yourselves in a musical category, which one would it be ?
David: French pop rock.
Camille: Musical categories are boring. They are so many that it doesn’t mean anything anymore.

MissaParis : And a category you would create only for the Exocet ?
Kévin: The boogie rock n’ roll!!

MissaParis : What is your first song’s title ?
Camille : We don’t remember any more ! The “dream catcher” perhaps. Any how one which appears on one of the records.

MissaParis : Among the songs your composed, what is your favorite one ?
Clément: “20 ans” precisely.
David: “La vie devant”
Kévin (he is hesitating) : “En attendant”
Camille: (he is hesitating): I like “Si demain” because it is quite progressive, unlike most of our songs.

MissaParis : In the Exocet, who writes and who composes ?
Camille : Every one. Each one brings his stuff, his touch.

MissaParis : On February 5th, you play at the Espace B, why should we come to listen to you ?
Kévin: Because we have planned a mix of crazy things and because it will be the first occasion for the Parisians to come to see us !

MissaParis :And could you tell us more about your projects ?
Camille : Projects, we have always ones, a lot ! if only we had enough time to do everything ! A CD which is waiting, we have plans for videoclips too, concerts. A lot things finally.

MissaParis : Speaking of projects, what is the Parisian stage where you would like to do a concert one day ?
Camille : The “Chez Ricky” (laughs)
Kévin : We hesitate but the Olympia, because it is a mythic place !

MissaParis : The inevitable MissaParis question : a good address to adivse in Paris ?
Kevin : Rue des rosiers ! They are fucking falafels there !
Camille : Yeah, but in which arrondissement ?
Kévin: Well, I don’t remember any more, but that is in rue des rosiers !
Camille : The good place will be the Espace B on Saturday !
Clément : We advise you ! Particularly on February 5th !

MissaParis : A last word for MissaParis’ readers ?
Kévin: Candelabra !
Camille: Thank you and see you soon !

Thanks to the Exocet for having taken time to answer MissaParis’ questions.
Go to applaud them on Saturday night : I will be there !

The website of the band, that is www.groupe-exocet.com. For more information abour the concert, click here and there for the previous booking !