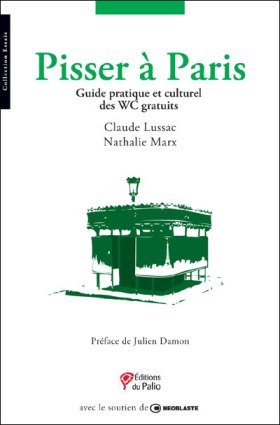 « Pisser à Paris » [Pee in Paris]. The title caught me at the first reading. Audacious, direct and explicit. If this last one is unequivocal, that book is more than a simple guide of the best free Parisian restrooms.
When the two authors go back on the backstage of « Pisser à Paris », over drinks in a pub of the XIth arrondissement, it is to speak about a true meeting. Very different Parisians’ one : an original one who knows the chic quarters and an adoptive one more familiar with the trendy quarters.
The idea of this project had been born 27 years ago in the head Claude Lussac – whose wife pregnant at that time, was prone of urgent needs-, and has been concretised with the meeting with Nathalie Marx. Followed several months of research, discoveries, experimentations of the Parisians WA, from the most luxurious, in the Parisian Palaces, to the most unexpected, at the Flunch (cheap French restaurant) in the Halles or in the back of an end road.
The result ? A guide which is practical (for sure), cultural (each chapter is riddled with anecdotes, mixing Story and litterature) and full of humor.130 places tested and (more or less) approved.
When the authors are asked for their “favorite loo”, the choice is not easy.
Claude Lussac chooses the one located Allée Marcel Proust (described page 95 from the book), place well known by this last one, who nicknamed the lady in charge of the toilets “marquise”. A place full of story(ies)for the two authors, the former one and the current one.
The toilets chosen by Nathalie Marx is very fantastic. It is even more that I had a little private and unexpected visit. Located rue de Montreuil (Page 121 from the book and presented in the video below), those restrooms are far from the ones of the Crillon or the Ritz, but behind the workshops of artisans bringing us back in the middle of the XIXth century. Neither comfortable nor extraordinary but they are authentic and full of Stories.
The toilets, the bathrooms, the restrooms, the lavoratories, the loos… The expressions are numerous, but they had to dare writing on this need that everybody has but nobody speaks about !
Are also hidden original and less known places, such ass the oldest public toilets in Paris in Madeleine Square, which were opened in 1905 and listed as and historical monument and unhappily closed to public from May 2011.

Happily you will still have 130 places in « Pisser à Paris », which enable you to discover Paris differently…